Just a short 30 minute boat trip from Stresa is the beautiful Angera.  We actually took the hydrofoil which was a little quicker than the ferry. This resort centre is situated at the south end of Lago Maggiore and sits right on the lakefront.  There is the ancient castle of the Borromea with a domineering position offering a great view over the whole lake and landscape. 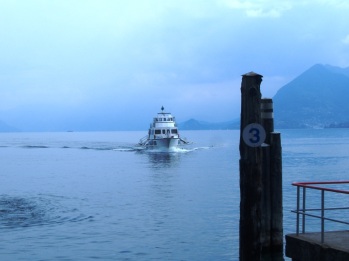 We had planned to spend an hour or so here, stop for a coffee and then continue on the next ferry or hydrofoil to explore other parts of beautiful Lago Maggiore.  Well that plan was out the window very quickly as once we stepped foot here we knew that it would be hours before we left.

We headed off on foot to explore.  Walking was very easy with so much to see from the Rocco Borremo to Italy’s first  museum.

We strolled along the shady waterfront which is speckled with villas and old fishing families’ houses and there are good views across the water to Arona.

Not far from the ferry terminal was a set of shops, cafes and restaurants where we eventually stopped for a lunch of classical local dishes.

Before lunch we did in fact climb the hill to the fort but that is worthy of its own story another time. This is quite a long steep climb and probably not recommended for anyone with walking limitations. 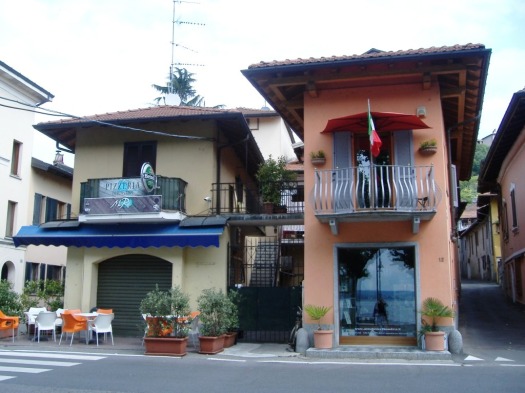 Angera, a delightful township  on the foreshores of Lake Maggiore and a lovely place to spend time.

One of my favourite things about visiting Italy is the Gelato.  Gelato is Italy’s version of ice cream. When at home in Australia I do not eat ice cream at all however when I am in Italy I manage to have a Gelato a day.  Mind you I could easily eat more than one a day. I wonder why I enjoy it so much in Italy and yet have no desire for ice cream at home. I believe it is because I was brought up on home-made ice cream which my mother made weekly which was very similar to the Gelato recipe.

Gelato can be made with milk, cream, sugars and flavourings such as fresh fruit and nut purees.  It is generally lower in calories, fat and sugar than ice cream. Gelato is a type of soft ice cream containing a relatively small amount of air. By statute, gelato in Italy must have at least 3.5% butterfat, with no upper limit established.

Gelato is churned differently than ice cream and contains less air. Despite its lower fat content, gelato has a creamy consistency, is thick, dense and elastic. But what truly distinguishes gelato is its taste.

Gelato shops in Italy are called – Gelateria (singular). Gelaterie (plural) are as abundant as pubs back here in Australia. One can find one on almost every street corner, well, not quite but they can be found in almost every village and city in Italy.  They are often the busiest part of town with the shop packed with people looking over the tubs full of Gelato on display and making their choice.  If you are undecided as to which flavour to choose, don’t worry cause you can get 2 or 3 scoops of different flavours on each cone or cup.  You’ll be able to identify many of the flavors by the pictures some shops include on the flavour cards, but others may be a complete mystery. Every Gelateria that I have been to, and believe me, that is many, offer for you to taste a sample of the gelato. So, if you are undecided, ask for a sample. They are always very willing to let you try.

Outside the gelateria is usually packed with people who congregate to enjoy their Gelato and for the locals it is a popular meeting place.  The daily passegiatta most often will have the locals strolling around their village enjoying a gelato.

I have been to many local football matches in Italy and usually after the game we all head back to the local bar. We Aussies have a drink, for me, a glass of wine; however the players usually have a gelato.  When we were in Porto Venere, each afternoon we would watch the local teenage boys playing football on the beach and after the game, where did they head to, yes, the Gelataria. We also observed the same custom in Stresa where the local football team all met for Gelati after the game.  Just so refreshing to see and of course so refreshing to enjoy.

Here are just a few of the flavours you will find at most Gelaterie in Italy.

Bacio:  a mixture of hazlenut and chocolate

Caffè: for lovers of espresso and cappuccino

Crema: Italian crema is a pale yellow colour and more like custard than cream.

Nocciola,  is a classic gelato flavour in Italy, one you will find in any gelateria.

Whatever else you’re doing, treating yourself to an ice cream is an important part of your visit to Italy.

Fortunately we do have Gelato shops here in Australia. One that I really enjoy is La Macelleria Gelateria in New Farm which is run by 2 guys from Bologna, Mateo and Mateo

Gelato – A sweet dream from Italy

After over 20 years of living in Brisbane I thought it was time that I learned some more about my city. Although I have been in to the city many times I have never actually taken the time to explore it.

So, I booked a tour with Brisbane Greeters.  It was by accident that I recently learnt of this wonderful program here in Brisbane.  I contacted them and organized to do a walking tour of Brisbane precinct. I met with my guide Bruce, at King George Square outside Brisbane city hall.  I was excited to do this tour however I was not prepared for how good it was.

Lucky me, I was the only “tourist” for this guided tour of our city. We started our tour in the square discussing Bruce’s plans for the tour. He made some suggestions and then with my input he customised the tour to fully suit me. Bruce gave me a brief overview of the history of Brisbane before we headed off.

We started our tour in the City Hall.  City Hall is considered to be one of Brisbane’s finest buildings. The building has been used for royal receptions, pageants, orchestral concerts, civic greetings, flower shows, school graduations and political meetings.

City Hall does offer its own guided tours of this lovely building so my visit with Bruce was certainly enough to whet my appetite to return one day for a tour.  In the meantime, from Bruce, I learned that the white marble staircase in the entrance is made using marble from Carrara in Italy, the bell tower was inspired by St Mark’s in Venice and the dome was inspired by the Pantheon in Rome.

From the city hall we walked over to the Brisbane Arcade which is a heritage listed shopping arcade and was built in 1923. Definitely one of if not the nicest shopping arcade in Brisbane consisting of beautifully designed shops offering high-end jewellery, clothing, antiques and much more. 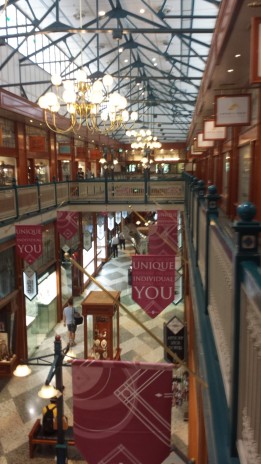 Our tour continued up Queen St to North Quay to the heritage listed Treasury building, which now houses Brisbane’s Casino.

The tour included many of Brisbane’s original buildings – the commissary which is home to the Royal Historical Society of Brisbane, and  Old Government house which is located on the grounds of Queensland University of Technology at Gardens Point.

The QUT campus is home to public arts venues, museums, top fitness facilities, and our state-of-the-art Science and Engineering Centre.

We stopped at the Pantry café on campus for our well-earned lunch and coffee.  After our small rest we headed off through the botanical gardens which is on the river and which Qut is attached to.

We had many stops along the way to our destination of St Stephens Cathedral the heritage listed cathedral church of the Roman Catholic Archdiocese of the city of Brisbane.

I learned from Bruce that part of the stone used in the construction of this magnificent building was taken from Kangaroo point just across the river. 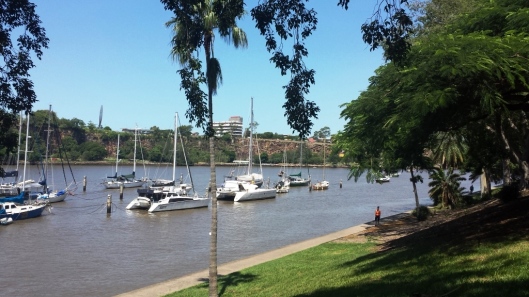 Bruce’s wealth of information was fantastic. He is very passionate about Brisbane and was so informative the entire time. 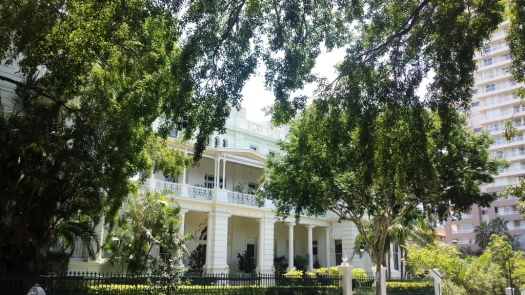 I later googled Greeters Organisation and discovered there are in excess of 90 cities world-wide offering this fabulous service including several cities in Italy.

On my way to lunch at Buca di Baldabo restaurant in the village of Vico Pancellorum I noticed a sign pointing to Limano.

So, I turned left and drove a couple of kilometres up the hill to the sleepy little village of Limano.

There was no sign of any sort of activity although from the lovely gardens and well presented houses it was very clear that it was well and truly inhabited. 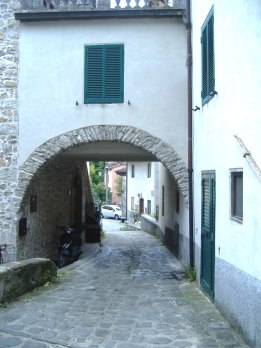 What a delightful discovery.

With my camera I went for a look around this lovely little village. It was very cold and lightly raining which I had not been prepared for but I was keen to see it all so I wondered around taking photos. 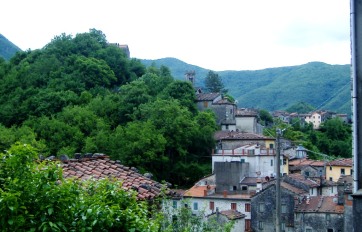 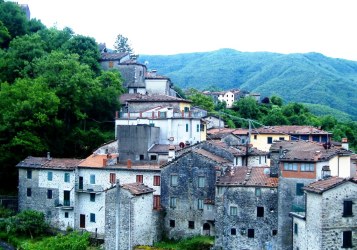 As I stopped to look at the cosy little houses the thought goes through my mind, why do people live in these isolated villages?  Do the young ones stay? What happens to the villages if all the young leave to pursue education and careers?

Limano, which has a population of about 102 inhabitants  is about a 15 minute drive from Ponte a Serraglio. The roads are steep and winding with many picturesque photo opportunities along the way.

Around the area of Bagni di Lucca there are many of these lovely little villages. I did get to explore several of them but there are still plenty more for me to see another time.

Artist inspired by my garden, the seasons and a smidgen of make-believe