Enroute from Perth to Margaret River we stopped at the famous Busselton Jetty.

The city of Busselton is about 200 kilometres South of Perth on the southwest tip of Western Australia.  It is known for its sheltered beach where we visited the 19th-century Busselton Jetty. This wood pier stretches nearly 2km to the Underwater Observatory, where life in a coral reef is on view. This is the longest jetty in the Southern Hemisphere. It was built in 1864 and modified over the years and is constructed of wooden piles. The jetty has a rail line  with an electric train that took us out to the observatory.

We settled in to the Stocker Preston Express for a very pleasant 15 minute ride along the jetty, including narration about the history of the jetty.  This electric jetty train which is powered by solar panels travels across the Indian Ocean to the Underwater Observatory, located at the end of the Jetty, where we were greeted by friendly volunteers. This Underwater Observatory is one of only 6 natural underwater aquariums in the world.

There are six flights of ten stairs within the Observatory however there is a lift which allows access if the stairs are not for you. I was very happy to take the stairs as we stopped at every level to listen to our guide’s explanations and see through the large glass windows. We descended 8-metres below the ocean’s surface marveling at the natural wonders that lie beneath the Jetty where we viewed the awe-inspiring forest of vividly-coloured tropical and sub-tropical corals, sponges, fish and invertebrates.

From the base of the observatory, the corals on the jetty pylons are gorgeous, and there are plenty of interesting fish to see – both small and large. I think one of the nicest aspects to this observatory is that the fish are ‘free’ – this is not an aquarium with captive fish. This is open sea and the fish are free to come and go as they please. I was fascinated watching a cute little seal frolicking and performing for us,  with a big smile on his face. 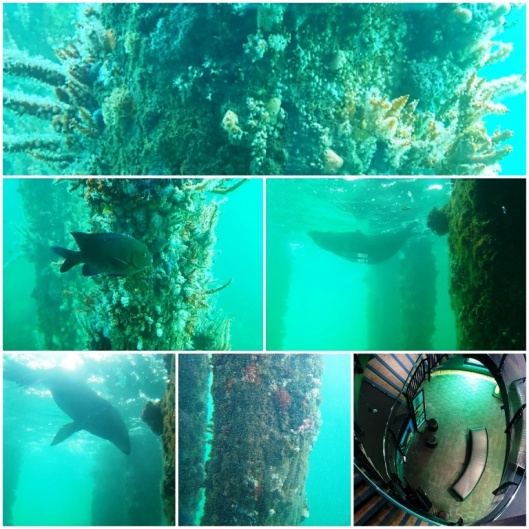 This fantastic open sea observatory was a memorable experience. The guides/volunteers were knowledgeable and enthusiastic and so friendly.  I was so thrilled to see the abundance of sea life.

You can take the little train back however we opted to walk the jetty. It was a very easy walk with seats along the way and it only took about 15 minutes at a casual stroll.